Falling gravely ill, journeying two death experiences, gifted with a miracle to return,
​all to begin a NEW Life​ .. of INTUITIVE HEALING.

Living on Purpose: Returning from a Death Experience to Become a Healer 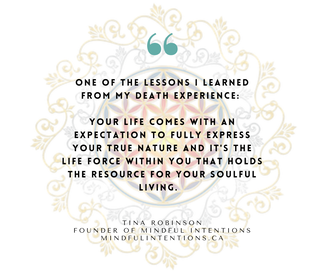 It was a Sunday afternoon in late August 2008 when my husband had driven me to the ER due to a sudden onset of symptoms that had progressed over a 10-hour period. Source unknown, I had somehow developed an infection and  quickly became septic. Shortly after arriving in the ER, I remember blacking out in the waiting room during the triage process and waking up in a Trauma Room. During one of my brief awake moments, I remember looking up at the blood pressure monitor and reading 49 over 28 .. I was alone to realize my likely fate. The infection had spread into my bloodstream, my organs were failing, my lungs were filling with fluid and I had developed pneumonia.

A moment I will forever cherish: The ER Physician had returned to check-in on me, and as he leaned down to observe my pupils, I remember telling him I didn't feel very well. He gently replied; I know you don't, and then proceeded to ask if I had any family members in the waiting room .. I didn't at the time as my husband had to attend another urgent matter at home. Realizing I was alone, the Doctor's demeanour suddenly changed and he reached to hold my hand. Choosing to stay with me in that moment as he sensed my death nearing, I remember feeling a deep sense of comfort from him as I faded into unconsciousness. Through an incredible journey to the other side, miraculously I had been chosen to continue my human life but not before journeying a second NDE in the ICU, this time I was blessed with a visit from my late Mother before returning to my physical body, and I can't possibly find the words that would describe how grateful and meaningful it was to feel her love again.
​
NDE Description:
Both experiences were very similar with the exception of Mother's presence during the second NDE. I remember my life fading as if I were calmly drifting off to sleep. It was very quiet, actually still sounding, as I floated in a black quiet space. A cloud-like formation began to appear in front of me. It was greyish-white in colour, oval-shaped and surrounded by a glowing bright white light. Effortlessly and body-less, my 'Energy' somehow was being pulled forward into its center and my memory of the journey was not one that was filled with question nor fear. I arrived again in a space that was complete stillness and my senses became very aware of my non-physical existence, realizing that I had passed. A super-fast reflection of my life left me feeling somewhat surprised as I was not expecting to die at such a young age. At the same time I was filled with the most PUREST form of LOVE, completely at peace and extremely accepting of my fate. Difficult to express in words as this level of LOVE doesn't seem to exist on earth... or at least I've never experienced such an incredible immense feeling during my lifetime. Fading into my awareness appeared a soft voice and interestingly, it wasn't male or female sounding. The voice continued to repeat my name until I was fully Present upon which time I received a download of information about the purpose of my life and the purpose of the human experience as a whole. Immersed in feelings of complete trust, love & belonging, with all certainty, I knew I was in the grace & presence of the DIVINE. I was encouraged to focus on my breathing as I would be returning to my body, as my life wasn't finished. Miraculously as I focused with intention, my eyes opened and I found myself back in my physical body, in the ICU, surrounded by a medical team who were working passionately to revive me. And my NEW life began.
My Near Death Experience (NDE) was very similar to Jayne Smith's in its nature yet uniquely different in design. I fully believe, those Souls who have been called home and return is ON PURPOSE. The knowledge that is held upon the return is intended to be shared and serve others purely. Spend some time with someone who has had an NDE; your mind will get inspired, your heart will be full and your life, deeply motivated. I encourage you to watch this video in its entirety, it will be time well spent as you begin this New Year.

Characteristics of a Near Death Experience

Most NDEs are felt as peaceful and loving, but some are disturbing. Each near-death experience is unique, but as a group NDEs display common features.
The same elements appear in both pleasant and disturbing near-death experiences, but with different emotional tones. PMH Atwater, one of the most prolific NDE researchers, in her book Coming Back to Life, described a peaceful experience this way:
Whether the NDE was beautiful or terrifying, near-death experiencers commonly say it was unlike a dream, "more real than real," the most powerful event in their lives. They struggle to find words to describe it, but insist they now know something new about reality, that "there's more than what's here" (in the physical world). Most feel deeply changed in their attitudes toward life, work, and relationships.
After a wonderful NDE, people almost always report losing their fear of death and believing that the essential purpose of human life is to develop our capacity to love. After a disturbing NDE , a person will almost always look for an explanation for having had the experience; because many interpret it as a threat or warning, they may try to change habits or behaviors, or to take up a new religious practice, hoping to avoid a recurrence. However experiencers adjust to these personal transformations, they often have difficulty finding someone they trust to tell about the event. They usually feel in great need of information and support.
Nearly identical experiences may also occur when people are nowhere near death, or not in any health crisis at all-perhaps during prayer or meditation, under deep emotional stress, or at the bedside of a dying person. Rarely, they seem to happen spontaneously. The general elements and aftereffects are the same as in the true "near death" experiences.​
PATTERN OF AFTEREFFECTS
Around eighty percent of the people who experienced near-death states claimed that their lives were forever changed by what happened to them. On closer examination, though, a pattern of surprising dimensions emerged. Experiencers were not returning with just a renewed zest for life and a more spiritual outlook. They were evidencing specific psychological and physiological differences on a scale never before faced by them. And this was true with child experiencers, as well as with teenagers and adults.

​Various researchers have attempted to profile these changes over the years. Even without the necessary funding to do clinical studies, most feel that enough research has been done to justify acknowledging the aftereffects pattern and making information about it available. Knowing what is typical for experiencers should help to alleviate any worry or confusion not only for the individual involved—but for family and friends, as well as health-care professionals and the community at-large.

​The pattern of aftereffects from near-death states can best be understood if considered under the separate headings of major characteristics of psychological and physiological changes. Details and explanations follow:

MAJOR CHARACTERISTICS OF PSYCHOLOGICAL CHANGES
Loss of the fear of death, more spiritual and less religious, easily engage in abstract thinking, more philosophical, can go through various bouts with depression, more generous and charitable than before, form expansive concepts of love while at the same time challenged to initiate and maintain satisfying relationships, "inner child" or unresolved issues from childhood tend to surface, less competitive, convinced of a life purpose, rejection of previous limitations in life and "normal" role-playing, heightened sensations of taste-touch-texture-smell, increased intuitive/psychic abilities plus the ability to know or "re-live" the future, charismatic, a child-like sense of wonder and joy, less stressed, more detached and objective, can continue to dissociate or "separate" from the body, easily absorbed ("merge into" whatever is focused on), hunger for knowledge and learning, highly curious.
MAJOR CHARACTERISTICS OF PHYSIOLOGICAL CHANGES
Altered thought-processing (switch from sequential/ selective thinking to clustered thinking: thoughts bunch together/ideas pop up), comfortable with ambiguity, heightened intelligence, more creative and inventive, unusual sensitivity to light and sound, substantially more or less energy (even energy surges in body), reversal of body clock, lower blood pressure, accelerated metabolic and substance absorption rates (decreased tolerance of pharmaceuticals and chemically treated products), often turn to alternative healthcare treatments, electrical sensitivity, synesthesia (multiple sensing), increased allergies or sensitivities, can possess ability to heal, a preference for more vegetables and grains (less of meat), physically younger looking (before and after photos can differ).Aftereffects cannot be faked. Nor can you hide your response to the way they affect you (whether you realize what you are doing or not).
You may be able to delay their onset or lessen the impact they have, but you cannot pretend away the complex and life-altering potential they bring.
Irrespective of any drama brought on by near-death states, what happens afterward is where true value and real meaning are established.

HELPFUL NOTES
Adjusting to the aftereffects takes time. The first three years tend to be the most confusing, almost as if the individual isn't "fully back." Experiencers and their families are urged to attend or start a local IANDS group, and to read books for indepth research studies about aftereffects.
​Serving Mississauga Since 2010 |  info@mindfulintentions.ca